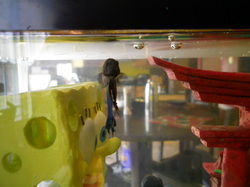 Some background information:
Yes, Fishy Swa is a fish.  And I got the name from  the internet (sadly.).
This is the story of Fishy Swa.

It was my birthday, July twenty six, and my friend gave me a betta fish. who was born on the same day as me.  And it was mine.  My generous friend handed over my birthday buddie to me and I was excited like I HAD NEVER BEEN TO A PIZZA PARTY BEFORE!  It was actually a pretty dark night that time, and I could barely see him on the car ride back home.  The little fish bowl rested on my lap and from time to time I could see a tiny flash of blue in the tank.
That night when I got home, I put him in my room.  But my mom didn't like that.  I instantly put him downstairs, where he spent his first night at his new home.  Anyways, that night I thought about names for him.  Oliver?  Nah, that was my brother's name.  So that night I just shrugged it off and called him no-name.
The next morning I took him out of the tank with my net, just to practice changing his water.  And he didn't squirm at all.  I wondered, "Is he dead?"  But when I placed him back into the tank, his fins...  HIS FINS!!! THE FINS!!!  THEY WERE WHOOSHING LIKE MOTORCYCLES!!! LIKE WIND TURBINES IN THE MIDDLE OF A HURRICANE!!!  They were all out, making him extra cute.  I remember that day I actually crafted a top to the tank because I was scared of the hyper fish jumping out...  I was an idiot.
Days passed, and finally he calmed down.  I looked at him.  At the time, because of his sloppy actions when I scooped him up with the net and played with him, I decided to call him by the name of 'Fishy Slop'.  So every day, when I cherished my dear little Feeshy Slop, I would call out to him, "Little fish, Dear little fish, Here is your food!  Enjoy it!"  And he would enthusiastically swim to the top of the tank and look at me, as if he knew what I was saying.  And I smiled.  I love that fish...  Until... one day, I was surfing the internet for a name for my stuffed animal shark and I saw a line of names:

That was it!  Fishy slop made my brother tease me of the name... but Fishy Swa!  It was perfect!

Six days later, my school had a 'cutest pet' contest.  I knew Fishy Swa would win.  I gathered four pictures of him and printed them out.  Then I wrote in big, bold letters:  This is Fishy Swa.  He is a Betta fish.  Vote!

I had gotten my whole homeroom, and a couple kids from other homerooms (like Mrs. Tiven and Mrs. Nrie Navonod's) to vote also.  It was great.  And as for fishy...  He was famous.  People from all over school, the 6th, 7th, And even the big 8th graders had known about him.  Fishy Swa, you were a celebrity!  For months, he was All I could talk about.  I even made a little song that went...

Yea...  That was one of the most annoying songs ever...  And the fact that when most people saw the word, Swa, they mushed up their faces and went, "Wha???"  No one pronounced his name right when trying to read it for the first time, And I proudly smiled upon Fishy Swa, and laughed with him.  I shared all my feelings with him.  I remember one time that my family was upset at me, and the only one who would listen to me, and who I felt comfortable crying around was... Swa.  He was my savior.